Cookie preferences
This website uses cookies, which are necessary for the technical operation of the website and are always set. Other cookies, which increase the comfort when using this website, are used for direct advertising or to facilitate interaction with other websites and social networks, are only set with your consent.
Configuration
Technically required
These cookies are necessary for the basic functions of the shop.
"Allow all cookies" cookie
"Decline all cookies" cookie
CSRF token
Cookie preferences
Currency change
Customer-specific caching
Individual prices
Selected shop
Session
Comfort functions
These cookies are used to make the shopping experience even more appealing, for example for the recognition of the visitor.
Note
Statistics & Tracking
Affiliate program
Google Analytics
Track device being used
Categories
Information 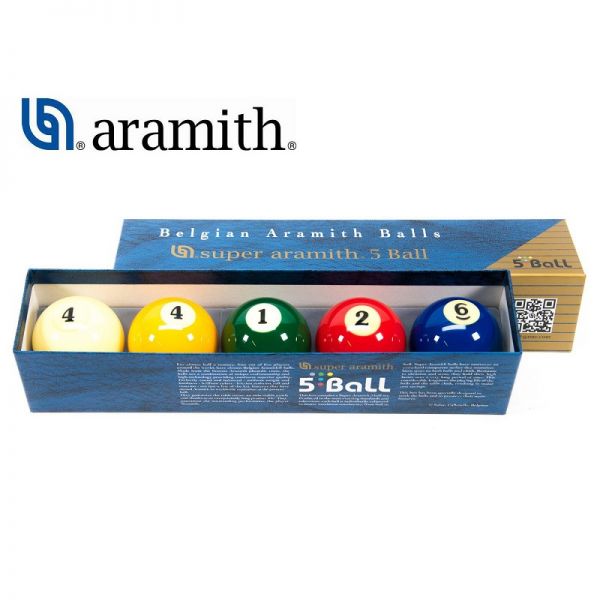 The 5-Ball set is the new Carom game developed by Saluc/Aramith and the Dutch Billiard Federation (KNBB). Specially developped to introduce carom to the younger generations, the 5-Ball set is an enthusiastic and dynamic game, that allows beginners to succeed their shots while experienced players will like the challenge that this game offers. The set consists of 5 Carom billiard balls (official size), and the fact that they are numbered is by far the novelty that all players were expecting.

Contained in the scope of supply:
Set include 5 balls

Rules of the 5-Ball Game:

The 5-Ball game is played with 5 balls and in rounds. In advance, make an agreement on the number of rounds to play and on an odd number of points per round (e.g. 51, 101, 151 points). As per the game of Darts, the players play by turns. The player scores and deducts the result from the number of points agreed, and subsequently from the last points obtained. The first player having 0 (not below) wins the round. The next round restarts with the same agreed number of points.

SCORING
The balls are numbered and the number on the ball represents its value (green ball= 1 point, red ball= 2 points, white ball/yellow ball= 4 points, blue ball= 6 points). The cue ball of the player must hit at least two different balls (could also be the opponent's cue ball) to score. The values of the hit balls are added, getting the score per shot. The cue ball of the player has no value.

STARTING THE GAME:
The balls are put on the table as per above drawing to start the game. The red ball is on the top spot, the blue ball on the middle spot, the green ball on the bottom spot with the white ball on the right and the yellow ball on the left. The players decide by toss who starts the game. The first player plays with the white ball, the opponent with the yellow one. Each player keeps his cue ball throughout the game. To start the game the player must hit the red ball first. For the next shot the player may choose any ball to hit. In case the start failed, there are no winner points and the balls remain in the same position and the opponent plays. The score per shot is the sum of the value of the different balls hit by the player's cue ball. If the same ball is hit twice or more by the player's cue ball, the value of the hit ball is only taken once into account. The cue ball of the player has no value.

EXAMPLE:
The player plays with the WHITE ball. He hits the RED ball (2) and the YELLOW ball (4). SCORE = 6 points. This is a VALID score that can be deducted from the total of the player.

END OF THE GAME:
To win the round the player must reach 0 (not below). If the player makes more points than necessary, the score is not validated and there are no points deducted. EXAMPLE: a player must make 5 points to reach 0. He hits the BLUE ball (6) and the RED ball (2). SCORE = 8 points. The score is not valid because he has made more points than necessary. The player keeps his 5 remaining points and the opponent plays.

BEWARE OF REMAINING POINTS 1, 2 & 4 AND BALLS OFF TABLE
It is not possible to win a round IF the player's remaining points are 1, 2 or 4 points, because in the next shot he must hit minimum 2 balls. So, the player keeps his number of points (he does not score) and the opponent plays. EXAMPLE: a player must make 9 points to reach 0. He hits the YELLOW ball (4) and the GREEN ball (1). SCORE = 5 points. The player still has to make 4 points. By the next shot he cannot reach 0 because it is not possible to make 4 points by hitting two balls. In this case the player keeps his number of points (9) and the opponent plays. If a ball falls off the table, the shot is not valid and the ball is put back on its initial spot (see drawing). If that place is blocked by another ball, then the ball is placed on the first available initial spot (sequence to keep: white or yellow, green, blue or red)

Related links to "Super Aramith 5 Ball carom ball set"
Available downloads:
Evaluations 0
Read, write and discuss reviews... more
Close menu
Customer evaluation for "Super Aramith 5 Ball carom ball set"
Write an evaluation
Evaluations will be activated after verification.
Customers also bought Customers also viewed
Customers also bought
Customers also viewed
Viewed
This website uses cookies, which are necessary for the technical operation of the website and are always set. Other cookies, which increase the usability of this website, serve for direct advertising or simplify interaction with other websites and social networks, will only be used with your consent.
Decline Accept all Configure